what had 65 year-old abed learnt? and what risk-of-extinction challenges were billion poorest women and all 7.5 billion people facing as the most critical quarter of century of von neumann tech reached every gps-coded device?

40 years earlier: abed had learnt from his days as a shell ceo that only a good business model can change the world; 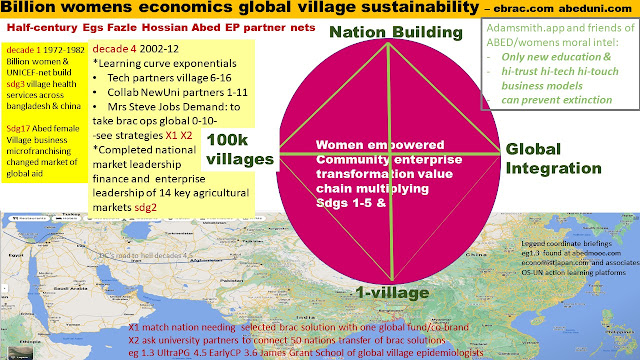 you need positive cashflow to scale, and to prevent uniquely sustainable purpose (evidence from 20th century on this is at economist intel book brand chartering by chris and norman macrae, 1996) being taken over either by an image-led corporation directly or business lobby politicians;

abed wanted a different global model from dominating the world, the way now sun by about 70 of the biggest hundred economies in the world are now corporate

digital leaps from 2002 : through his bracnet partnerships now about 6 years experience of seeing how tech partners might bring mobile and solar connectivity to village mothers who had never before been connected by electricity or telephones let alone smart devices and he was one year into birthing what could 4.4 university do as partnership platform to sdg1 to 17 -

additionally,  he was being challenged from silicon valley millennial goals influencers eg the likes or mrs steve jobs to take brac international (not to reserve the magic of brac to women nation builders of bangladesh - her demand was reaching other west coast influencers like bill gates foundation and george soros east coast networks which had initially funded grameens internet girls. tick tock )

so he worked on 2 ideas at same time

see bracs 14 enterprises 2.6  and additions to sdg-compass 1, namely: 1.3 ultra poverty graduation 1.4 brac sme city bank 1.5 bkash cashless banking which came about when the technologists that had given dr yunus village phones decided they wanted a more sustainable type of partnership network than yunus as the worlds greatest storyteller

abed was deeply concerned not just with which solutions of brac's partners' first three decades  matched other countries most urgent needs but could he find an international funding institution that wanted to co-brand that national change for as long and it took to empower national culture- abed knew his limitations at 65 he iud not want to spread his learning too thin; and his interpretation of paulo freire culture was it checked out which faiths  grounded servant leadership in every community - he rated himself very lucky that health markets needed by confucian and muslim ladies had so far found fransiscan values a moral and conscious translation- as indeed had the silk road marketers across eurasia 800 years earlier

regarding brac's journey from regional to global identity since a bangladesh registered ngo cannot fundraise for international projects :abed asked himself where should brac establish its international hq -coming from royal dutch shell abed gave the netherlands first opportunity to value this which thankfully the royal family welcomed...