note from blog co-editors- we commit to continue to help youth and yunus celebrate the search for millennials 30 most joyful and sustainability capitals at http//yunuscity.ning.com especially the convergence of rome and atlanta to the most massive 4-hemisphere youth celebration of ending poverty and obs creation ever peacefully staged in the USA (Atlanta Nov 2015); in mobile village world we will linin every open technologist of women4empowerment and wizard tech; and work with beyond-MOOC platforms elarning satellites and MARYSEARCH aims t map wherever POP (Preferential Option Poor) and MFTRUST celebrates every life-saving profession and you tell us Happy New year from the first day of 2012
http://www.youtube.com/watch?v=4EvoBtOBKLk&feature=youtube

DR YUNUS
The year 2011 has been a difficult year for all of us:’
People in Bangladesh with Grameen Bank and Grameen companies have had to suffer through a lot; and also the people outside: the friends of Grameen suffered a lot. I am happy we have got through all this keeping the spirit of Grameen in tact, and I am very happy for the support we have received during this traumatic period within the country, outside the country, all the friends around the world. That kept us strong, kept us moving forward

Now we have entered 2012 – a beginning of new hope, a new start – we see how what this year brings to us . We are looking forward to a year of peace, of accomplishments, a year of lots of memories, achievements that we all can bring together

In 2011, we had problems beyond Grameen, The problem of microcredit: The press were very critical of microcredit in 2011. Lots of stories came, lots of accusations came; it became a global phenomenon as if microcredit is about to disappear, which luckily is not the case. We have explained to people what was the problem, it was a localized problem in India, not a general problem. Now things have subsided , microcrwdit can move ahead stronger than ever.

We have the problem in Europe of financial crisis, debt crisis, of the euro, of massive unemployment,. This has raised lost of issues about the structure of the economy, the ideas of what economic systems bring. We have found out that the ruling economic system created many, many problems that remain unresolved. So in 2012 we need to see where we go from here. 2011 has not been a good year as far as economies (people lives ) have been concerned in Europe, or North America

So we need to put things in perspective. Have we come to an end of one human civilization? That one built on a particular framework which we can now see that not only doesn’t solve problems, itself doesn’t function – it causes a crisis that is unmanageable . The present system has brought the problems of climate change, problems of poverty, problems of poor health – all the massive problems that we have been talking about.

So now the fundamental issues suggest this structure cannot remain in place. So 2012 has to address all these issues : can we end one civilisation and at same time start building a new one? What will be the building blocks of this new system? One of the building blocks we offer from our side which we have been doing for several years is the idea of expanding the capitalist structure. We have to put in the building block of social business – another kind of business – the obsession with money cannot just continue- we need to become conscious of the society, of other people in our individual lives which is missing in the present system. So that’s what we need to bring in very consciously in 2012 – the building block of Social Business. We have to make it recognisable, make it attractive, make it functioning all over the world – not just in 1 country or 2 countries – we should be working in at least 50 countries -taking root this year, so at least two or 3 social business are functioning. We have to move on from achievements of 2011 of Social Business to a 2012 level where it will be feasible, it will give hopes to people, it will excite the young generation, To the young people of the world : yes you don’t have to inherit a crumbling structure, we can build a new structure and this is within our means and capacity to do. That’s what we want to do, so 2012 will be the year for young people, for creativity , the year of social business .We have lots of actions lined up for 2012 –as far as Social Business is concerned. We need you to get involved in Social Business, each one of us can create Social Business by creating ideas, by bringing new designs for SB. Once we can put the design in place, we can go into actions. Today some structures are already emerging, and 2012 will give them more shape. So that they can be functioning.

Events that we have designed in past will continue in a stronger way. First of all in beginning year National University of Singapore organising SB forum for the region. We will bring people together right form the beginning of the year to see where we stand and what needs to be done. All of you are invited to come and join us in Singapore at end of February. So this is the first one we see on the agenda. The next one we see is in Japan in July – the social business forum Asia that is organised by Fuzhou University – a very important forum bring business leaders, youth across region and policy makers , academics to get together to see where we take social business in Asia. Then the global social business summit- the fourth summit (the 4th one) will be taking place in Vienna in first week of november. We look forward to seeing you there with lot of ideas, concrete ideas not just coming to listen- we will have a large display room to see what we can do for employment generation , addressing climate and environmental issue – many things we want to do. So all these thing will take positions, there are many initiatives coming from many countries. We are also looking forward to Social Business tours – first Social Business tour of Africa on millennium goals- and we would like this to extend to North Africa and Middle East and other regions. We want to connect concrete action plans across the countries we go to. – and connect young people and business ceos so that these contacts can start a whole series of Social Business all around of us. We want to make 2012 a memorable year for SB, really giving a big push in terms of thinking, actions, connecting new partners. In terms of exploring possibilities, We don’t want to get caught up in sad news, all the difficulties of economy, all the depressing thoughts of unemployment. We want to bring out the entrepreneurial ability of people rather than just waiting for getting a job. We will have to see who wants to be job seekers or job givers. Definitely Social Business opens up the possibility t many people can be job givers.

Two things we would like to focus on in 2012 from Social Business side
:
Emphasising participation of young people in large numbers in an active way.
We need to focus on priority areas job creation and entrepreneurial activity because unemployment has created crisis around young people everywhere, So this is a good time to see that unemployment can be overcome- we would like in the new civilisation we want to build, unemployment should be a word of the past. It should be banished . We see it as the very nature of people to keep themselves busy, keep themselves utilized- there is no reason why an active human creative human being should be unemployed and not able to exercise her or his own creativity through life.

Achieving the millennium development goals by 2015

Focusing on achieving the 8 goals, you can pick one of them or part of them and see concrete examples of creations of that. We will be bringing technology, creating new technology and creative power to address those problems. This is the beginning of a complete action so that we build up a massive solutions infrastructure.

So these are 2012 challenges to the world altogether . Keep in touch – we wish a fantastic year for all of us not just us in this conversation but the whole world. We cannot just go on the way it was , we have the power to change the world and we must do it, we must change the world, this is our task, and we will accomplish it by making 2012 the year we make the building block we are looking for, and we can present it to the whole world as social business. We wish you a happy new year and a very successful new year.
Thank you 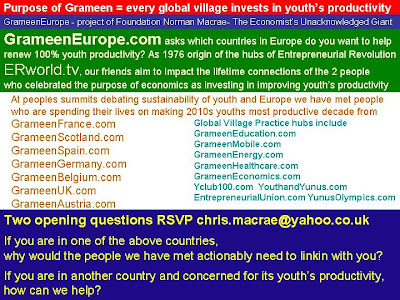 Invitation to co-blog and 2013 namechange to MARYSEARCH

Update 2015 April  -LOTS for POP fans of MarySearch to celebrate
Jim Kim got 30 religions and cultures to commit to peacefully uniting human race around end poverty - a special shoutout to south americans the host october 2015 out of peru of jim kim's opening of world bank year 2015-2016 -its about time the epicentre of POP (Preferential Option Poor), the major scaling epicentre of partners in ending tuberculosis and the world bank celebrated each other's social action networks


MARYSEARCH for most everyday educators. parents , youth, community health workers this commitment for october 2015 preceded by the Pope's training of congress in september links in to co-creating social actions in ways that are far more locally grounded 24/7 than the orbit yunus has been taken into since 2006 (its instructive to see how maddening us consul correspondence was in 2006 by searching yunus and wikileaks- impossible to imagine how a nation's security networks could have done more to destroy an end-poverty workers local street cred or safety of women or youth trying to be his alumni- such branding incompetence I have not seen in all my lifes work on communications to end poverty

please tell me if you would like an invitation to co-blog  jobslearning.net which MOOCs, investor models, prof trusts empower millennials jobs, end poverty?

Prior to 2013 this blog was named Building Spcial Businenss -inspired by Muhammad Yunus
Posted by chris macrae at 12:21 AM 3 comments: